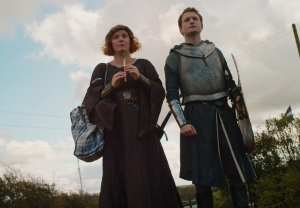 Arthur & Gwen are siblings, they’re also obsessive Cornish re-enacters on a quest. We follow our unlikely pair’s pilgrimage to a re-enactment near King Arthur’s birthplace; Tintagel. Having recently emerged on to the Cornish Medieval re-enactment scene, these misfits must put aside their sibling differences to travel to the heartland of their obsession.

A film by Bryher Flanders, Miles Sloman and Zoe Alker.

The film is available to view on BBC iPlayer here: https://www.bbc.co.uk/iplayer/episode/p084qj0y/new-creatives-anoraks

The instruments in this soundtrack are deliberately played badly and out of tune for comedic effect. Extracts of music from the comedy are available to listen to below.

Want to get in touch?

Send a message via email.